Pillars of Faith by William Adams

Tutorial Page
Not really a tutorial. More of a Shortcut actually.

Ok, here’s the instructions. As you can see this is a shortcut. You should really start with a full skeleton, but this way is faster. For both the male and female torso you have three lines that define the body, the curved line on the left and right are what you look for to define the height, width and symmetry of the body. After that you add a curved line on top which defines your shoulder line. Just below the shoulder line goes the line of the clavicle. This line is always straight and defines where the character is facing and whatever movement the torso might be describing. For example if one end of this line is lower than the other then that shoulder is dipping. If it’s shorter on one side than the other, then that shoulder is closer. After that you place a line to define where the abs start and stop so that you have a reference for the hips. The chest line is pretty much an afterthought that should help you for later.

Start the hips just above where the torso ends. Hips should flare out to about the same size as the chest on the male model and to about the same size as the shoulders on the female model. The shoulders come out and hang off the model but don’t define where the biceps start. The muscles of the arm come from under the armpit and join up with the shoulder at the back. The heads are a bit tricky, if you want you can draw a cylinder for the neck first to tell you where the base of the jaw should drop. Don’t make the head a circle or a sphere like they say in those “How to Draw” books, the head is more like an egg. Imagine an egg with the tapered part pointing downwards. Then join that with the neck by increasing the jawline. Then you can add detail in later. 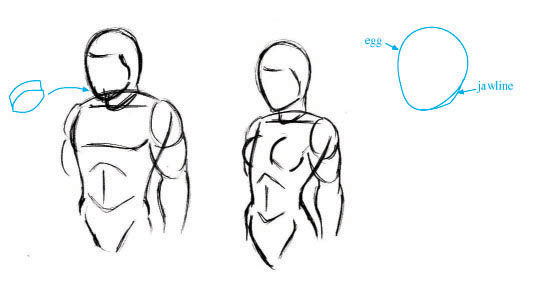 So everyone needs help with hands and a lot of people tell me I draw very good hands. So here are my secrets. (Don't you feel special?) Actually these are more shortcuts and even a few fakes.

1 So what is a hand? It's actually a little box with a few cylinders hanging off of it. Don't believe me? Draw a parenthesis ( ) and then starting from one edge draw four lines that extend outwards from the bottom of the box you just drew. Space them evenly and then draw a small circle at the end of each line so that the edge of the circle is touching the line on the right side. Now connect the free side of the circle with the point where the next line starts. You have your first hand!

2 What's that you say? No thumb? Well you've got your little box and your fingers. Now you need somewhere to place that thumb. From the top of the box make a line that extends down the left at a slight angle. About half way down, bring it in. Stop short of the bottom of the box, the thumb just doesn't like to hang with the other fingers. I think it's stuck up.

3 Now work on your other fingers. For a really fast hand sketch don't give your fingers three joints. That's wastefull when all you need is two. Look at your own hand for a minute. See that first joint? At a distance that's all people are going to notice. And if you have you fingers extended the first joint is where there's going to be a noticable bend in the finger.

4 Now you have a complete hand. You have your little box, your four fingers and the little bump where your thumb hangs. You don't see the thumb because it's on the other side of your hand.

5 Now you have your basic hand drawn from the perspective that most people are going to see. So now let's start on a different perspective so we can really say we've mastered the hand. The palm of your hand is composed of three odd shaped elipses. A long and flat elipse that anchors your four fingers. A stout elipse that's fatter on the inside than the outside. This one is the largest and is where your thumb comes out. And a samller, even shaped elipse that's the butt of the hand. Draw these real quick and lightly, then you can fill in the details.

6 Add in the fingers and thumb and now you have a completed hand. What I skipped a few steps? Ok, let's see how you can skip a few steps.

7 This is my favorite hand fake. You draw a triangle, cut off the points and then add in the wrist, the forefinger and thumb. You don't even have to draw the rest of the fingers because they're hidden by your cleverly placed palm which is nothing more than a stunted triangle. Remember to curve the thumb a little and to make the edge with the forefinger extend a bit above the edge with the thumb.

8 So you want to do it faster? Try this, make two curved lines one under the other. Make the second curved line steeper on one side than the other. On the first curved line on the opposite side make a thumb shape. There you have it. Another hand. Cut it up with three evenly spaced lines and you even have fingers.

9 For other perspectives try experimenting with the box and elipse aproach and remember to do the fingers and thumb with two joints to save time.

10 How the wrist connects with the hand is also important. The palm of the hand rises a bit from the wrist. On the other side it dips ever so slightly. Not much but a little.

11 Come on! You don't need help with fists do you? They're so easy. A little box with three lines. The first and second knuckles rise above the others but don't change the shape of the rectangle for the fingers. the thumb is a smaller rectangle just below the first finger that touches the second finger but doesn't get underneath it. Also unless the guy you're drawing is a professional boxer he's likely to leave his forefinger a little extended unless he thinks about it.

Step 1  First thing is the face mask itself. It's composed of five individual lines that set the boundries of the face and a central cross that'll give you a guide as to where the individual features are going to go. As you can see it's not a skull, it's only the face and if you don't have a good grasp of human figure you're going to get the hair all wrong if you start with a face mask without first learning how to draw the whole head.
Start with the curved line at the left. This line will give you the length of your face and if you work the rest of your lines from there also dictates the width of the face. The next line is the forehead line make this one with a small curve in the middle. Remember always, organic shapes. Falling directly off the forehead line is the temple line. Do a straight diagonal line that ends at about the same height as the furthest curve of the curved line to the left. This curve should be a little above the middle of the face. This is also where the horizontal line of the face cross should be. Then do either the jaw line or the ear line. The thing to remember here is to be able to draw a diagonal line at the same inclination as the temple line from where the left face line and forehead line meet and have it intersect with the meeting of the jaw line and ear line. The jaw line has a little j dip to it where you want the chin to be. Then you can do the face cross. The vertical line should run parallel to the left face line and bisect the chin if you were to continue down. The horizontal line should be from the furthest curve of the left face line to the intersection of the temple and ear lines.

Step 2  Now it's time to do all the little details. Start with the eyes. Where the face cross and the left face line meet draw a little dip with two diagonal lines. This is where the brow and cheeks meet. Parallel to this draw another curved line in the middle of the face cross. This is the nose. Draw the eyes to either side of the nose making sure they rest directly on the horizontal line of the face cross. About half way to the chin along the vertical line is where the nose ends. Remember to place it according to the nose line you drew at the intersection of the face cross. A little off to the left. Then below that between the end of the nose and the chin is where the mouth goes. Dip the temple line into the hair line. Up or down depending on the hair style. And finish up with the ear and the line for the cheek.

All Images are Copyright © 2002 William Adams and cannot be reproduced without permission.
Some Characters are inspired by the TV show Buffy The Vampire Slayer and their use here does not represent a challenge to any pre-existing copyrights or trademarks.
Warning: This comic may include adult situations and suggestive dialogue not suited for minors.

Send me an Email

Pillars of Faith is hosted on Keenspace , a free webhosting and site automation service for webcomics.